A single grain is a composition of millions of vegetable cells aggregated together. Each cell contains valuable nutrients: starch, lipids, proteins. The monogastric animals are well equipped to digest those nutrients as they naturally produce the enzymes like amylase, lipase, and protease. But, those valuable nutrients are protected by strong cell walls that prevent endogenous enzymes to access them.

This physical barrier is made of non-starch polysaccharides. NSP are mainly present in the cell walls of the endosperm but also in the bran. They include cellulose, hemi-cellulose (arabinoxylans and beta-glucans) and pectin, and can also be divided according to their nutritional value into water-soluble (beta-glucans and pectins) and water-insoluble (cellulose) fractions (Bach Knudsen, 2014). Cereals contain between 7 and 19% of NSP.

The cell walls of the outer tissues of the kernel mainly contain cellulose and complex xylans, together with a significant amount of lignin. Conversely in the endosperm, cell walls contain almost exclusively arabinoxylans (AX) and beta-glucans. Arabinoxylan is composed of ab-(1-4)-linked xylose backbone carrying arabinose residues or even more complex ramifications. 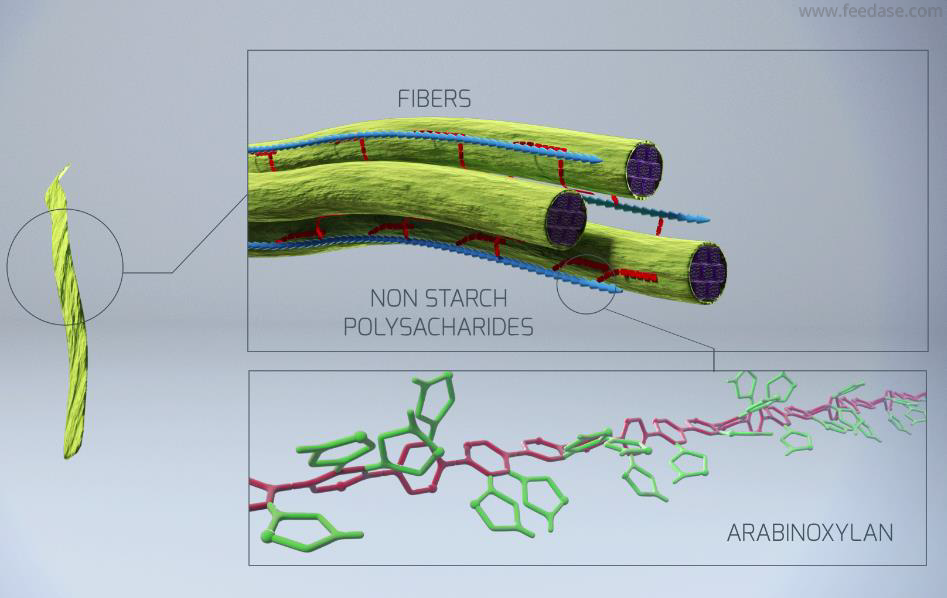 The arabinose:xylose ratio and the content of no-, mono and di-substituted xylose are variable between cereal grains and also between the different tissues within the same grain.

The digestibility of feed highly depends on the complexity of arabinoxylans.

Arabinofuranosidases: the revolution to boost the efficacy of xylanases